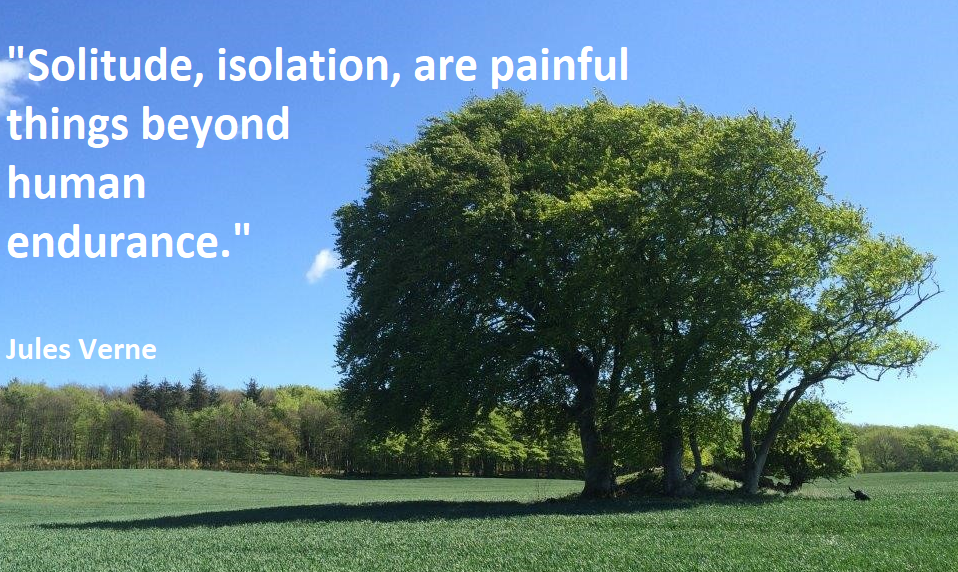 I know. I have tested every possible kind. From hospital isolation as a baby, to detention in solitary at boarding school… From confinement during war, to the desolation of the African bush. I’ve also experienced big city solitude and the isolated remoteness on our farm in Jutland, Denmark.

I am truly certified in The Art of Isolation. With distinction.

Constantly ill as a newborn – suffering from who-knows-what, I was repeatedly rushed to hospital in the capital city, which was over an hour’s drive from the farm. I was left there alone. The illness worsened, became more frequent; today the diagnosis may be Severe Panic Attacks From Constantly Being Kept From My Mother. I think that fits.

It was all the more exacerbated when I went to boarding school- aged six and a half. Bye-bye mother once again. Hello neurosis.

So many screaming little girls (of which I was probably the loudest) would send me in search of a “Little Quiet Spot”, which always lay out-of-bounds. The nuns’ punishments would range from gating, to solitary confinement, which was without any sense of quiet because it was beside the common room.

I was at war with the school. The country was at war with itself. It was Rhodesia 1975. Curfews fell from sunset until sunrise. When my parents had been in town for the day, my mother grocery shopping, my father searching for spare-parts or at bank meetings, they would join the convoy of farm vehicles guarded by armoured military trucks. They would then have to snail the long roads back, out into the distance, towards the far blue hills and the thickening bush.

Their homecoming routine involved locking the farm gates, then the security fence around the house, the doors and windows. They’d check the dogs, the guns, the radio-alert-station, the thick sandbags across the windows. Isolation paired with remoteness was not safe. But they were farmers. Farmers that survived alone. Living in Lockdown.

Yet the farm-life was where I felt free, even though I was not allowed to run everywhere on the farm. There were out-of-bounds places where armed anti-government fighters lurked, and this is where I went to hide; but with my dog. Throughout the school holidays I walked, took the motorbike, or rode the horse. I picked flowers, mimicked bird calls and caught butterflies. I never felt alone. The days were idyllic. Though the nights were terrifying.

The war eventually ended, as did childhood, and I was pushed off to study in Europe – in attempt to get that grown-up grip of my life that one is supposed to grasp along the way. I had severe butter-fingers. I lived all over the place, trying to tackle as many countries and cultures (and studies) as possible. I was forever desperate to fit in, but I was always “new”, different, and therefore also lonely. Solitude followed me around like an obsequious shadow and I kept on moving. Roots simply did not grow out of my toes.

I withdrew into my self until seclusion drove me kooky and then I would burst out demented and desperate to party and socialise. I’m still painfully suffering from this syndrome.

Writing and painting therefore, seemed to suit me- narrative and art swirling within this crazed circle of isolation and the sudden frenzied social outbursts.

And then Love popped up and as is the case, Love was blinded to my whacky, idiosyncracy. Lucky me! For when the Love fog cleared, it was just too late. And he was titled to Saint Peter the Great (by everyone).

And he also has a farm, just in Denmark, rural Jutland to be precise. Isolation with a crown. Green and grey, fjords and fields, trees and tracks, wind and wind and (lots of) wind.

But, of course, there is magic and beauty in isolation, one just has to find it.

Hence when this pandemic began to spread isolation, I was suddenly being contacted by many frustrated individuals, all asking what to do and how to do it.  Finally, people were actually querying me for my opinion, and even being attentive…

Actually, to tell the truth: I don’t know. I may be African but I’ve never been in a pandemic before.

No idea, I awake to panic attacks and lie awake at night panicking about trying to get to sleep.

“How will we not go mad? How do we stay normal?”

“But Kyne, you live on a farm in the middle of Jutland’s Rural Nowhere.”

I fell in love with the Farmer, not the farm.

“But it’s the middle of Nowhere?”

No, it’s passed the middle. It’s on the edge, just before one falls over the side of Nowhere… into Nothingness.

The Danes say: Where the crows turn back. (Except this crow didn’t).

“Just answer! This Isolation! This Madness! You know both! So frikin’ tell us what to do!”

Oh, simple! If you cannot beat it, join it. (The Madness, not the virus). You cannot beat isolation, social distancing, quarantine, Lockdown. So just do it. And try to actually enjoy it. (With a touch of Quirky.)

Just try to make the best of Isolation. When it comes to solitary survival skills in Isolation – I have a mass of suggestions and of course, opinions.

After all I am truly certified… certified in the Art of Isolation.

Born to Danish parents, Kyne grew up on a farm in Zimbabwe and has never broken free of the African bush. Since the age of 18 Kyne has spent her time between Europe and Africa, mulling, pondering, ruminating, studying, creating, and embracing the rich tapestry of life.